Members of the WSA receive the newsletter and interim flyer as part of their membership. Look here for information on how to become a member.

Whether you’re a member or not, we are excited to hear about your art-related adventures, exhibition reviews or travels, accompanied by your own photos. These will be reviewed by the WSA and included if we have space and they do not conflict with our operations. The Executives decision is final. Please contact us at wsa@wsa.org.nz 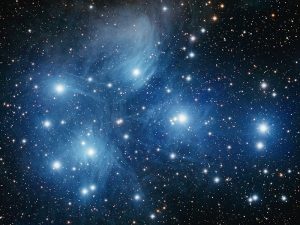 What is Matariki? Ko Matariki kei runga, ko te tohu tēnā o te tau!
Matariki signals the Māori New Year. It is a time of renewal and celebration in New Zealand that begins with the rising of the Matariki star cluster.
The Matariki star cluster. The two meanings of Matariki both refer to stars: mata ariki (eyes of god) and mata riki (little eyes).
When is Matariki?
Matariki is a star cluster which appears in the night sky during mid-winter. According to the Maramataka, Māori lunar calendar the reappearance of Matariki brings the old lunar year to a close and marks the beginning of the new year. Hence, Matariki is associated with the Māori New Year.
Ka puta Matariki ka rere Whānui.
Ko te tohu tēnā o te tau e!
Matariki reappears, Vega starts its flight.
The New Year begins!
Traditionally, festivities were conducted to celebrate Matariki. They followed the harvesting of crops when the pātaka, food storehouses were full, freeing up time for family and leisure. These festivities included the lighting of ritual fires, the making of offerings, and celebrations of various kinds to farewell the dead, to honour ancestors, and to celebrate life.
Ngā kai a Matariki, nāna i ao ake ki runga.
The foods of Matariki, gathered up by her.
Tohunga, Experts looked to the Matariki star cluster to find out how abundant the upcoming year’s harvest would be. Bright, clear stars promised a warm and successful season. Hazy stars, however, warned of cold weather and poor crops.
Courtesy of Te Papa Tongarewa
matariki-book-a4

May 2021: Exhibiting at Mavis and co Rototuna